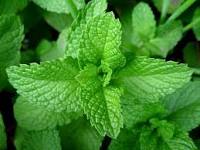 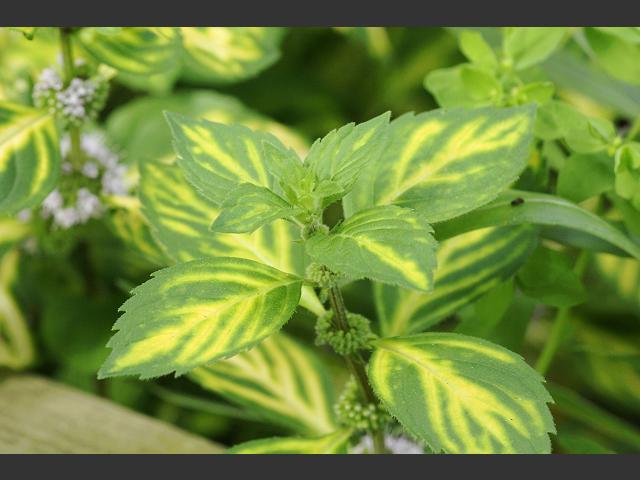 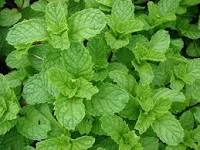 Garden mint is a thug not to be believed. Plant mint on the North side of the house and it will soon travel to the South side whether you want it to or not. Mint is the perfect herb for a container…all by itself. The two most commonly grown mints are spearmint (less minty than other mints, loaded with health benefits and best for tea and Mojitos) and peppermint (the “minty-est “ of all and most used in candy, gum and toothpaste). Spearmint and peppermint ARE the most common mints and the easiest to find but there are more than 20 species of mints out there. Pennyroyal, Corsican, pineapple, chocolate, ginger, orange, lemon, apple,…the list goes on and on. Don’t be afraid of them. Plop them in a pot, give them moisture and some shade and if nothing else, you can brush your hand over them to get the wonderful fragrance of mints. All mints smell wonderful.

But on the other hand…we have Herb Robert.

Herb Robert (Geranium robertianum) is a pervasive weed that is now on the Washington Noxious Weed list. It has pretty ferny leaves and a cute little five-petaled pink flower but it can easily take over a garden. 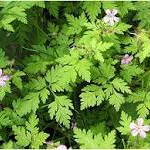 Don’t be fooled by the pretty “tease” when it blooms. The good news…it has a very shallow root system and it is easy to pull out. If you’re not sure about the identification…take a whiff. It is “unpleasant” to say the least. It’s no mint.

“Every time we bring ourselves to a place of relaxation the memory preserves it”. What a wonderful thought from “The Herb Lover’s Spa Book” by Sue Goetz.

Sue Goetz is well known in the South Sound for her garden design and herb talks. It’s pretty obvious that her passion for gardening in general and herbs in particular runs deep. In “The Herb Lovers Spa Book” she posits that we can all have and deserve a special “me” space… at home. Sue gives detailed direction about how to accomplish this by asking four questions: “What will I do in the space? When will I use it most? What additions are needed to meet my needs? What would preclude my enjoyment in the space?” Once you answer these questions you have begun to create a “me” space. Then come the herbs. Sue gives you the scaled down list of the best herbs to grow for the spa recipes that follow. The ideas are straightforward and the message is clear, “Take care of yourself”. This one is a “feel good” keeper. 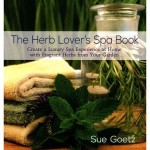 Isn’t it ironic? An over-the-top, tanklike, street-legal vehicle that weighs 4 tons and takes up 3 parking spaces; and a tiny, wing-driven, needle-beaked creature that weighs 1 ounce and fits inside a teacup, share the same descriptive name…”hummer”. And even more ironic, it’s the “little guy” that creates the most excitement.
A tiny “hummer” is one of nature’s most intriguing creatures. No matter what the situation, if a hummingbird enters the picture…all related action ceases and all eyes are focused on a whirring, feathered blur. Small children have even been known to be still and quiet when they see the hovering and hear the buzz of a hummer. That alone makes the hummingbird invaluable.
The hummingbird is an acrobatic, sweet-seeking missile with a feisty attitude. It flies forwards, backwards, sideways or hovers in one spot. It thrives on nectar and insects and is the smallest warm-blooded animal. In a single day it and can consume twice its weight in water and half its weight in food. It travels thousands of mile to stay warm, and more than 160 native plants depend on it for pollination. It can fly up to 50 MPH and the recognizable hum is from the beating of the wings, about 200 times per second…that’s per second! It’s a powerful, self-contained, mystifying machine with unusual habits.
To begin with, familial duties of the hummingbird seem to be a bit one-sided. The female builds the nest, incubates and feeds the young without any help from the male. “Love’em and Leave’em”.

Three hummingbird species with differing habits frequent the South Sound. The Calliope Hummingbird, the smallest bird, is occasionally spotted in our area but it’s usually just passing through to higher ground. Even if it shows itself, it is most likely perched above treelines. Unlike the others, it prefers higher elevations. Mountain meadows are more to its liking. It’s the lower nesting Anna’s and Rufus that we are lucky enough to have as woodland and garden companions.
Anna’s Hummingbird is the one with a shorter bill. The male is easy to spot because of its bright reddish head. The female (the one doing all the work) has a green head with a little bit of red on the throat. Anna’s live in open woods but have taken up

residence in local parks and gardens. More Anna’s are in our home gardens because of hummingbird feeders and exotic plantings. We can grow more species of plants in our area than anywhere in the world except for the tropics and that is only because the tropics have orchids. We have a lot of plant material from which to choose. The male Anna’s Hummingbird has one amazing act, his courtship flight dive. He flies into the air then dive bombs making a loud popping noise. Then he buzzes, chips and chatters. It’s exciting but a little frightening.  It’s the Anna’s hummingbirds that can be coaxed into staying year round.

The Rufus is the other hummingbird most commonly found in the South Sound. Rufus hummingbirds aren’t year round residents. They claim “snowbird” status, wintering in South Texas and Mexico. They typically show up in the South Sound when red currants start to bloom. Males are rufus (reddish brown) all over. Females are green above. Their throats have a reddish spot. The Rufus male isn’t quite as dramatic as the Anna’s,

preferring to “display” rather than dive. Male and female are both highly territorial. Nests are once again built by the female and are often found around huckleberries, blackberries and alders. Nests can be as low as 2 feet off the ground and as high as 10 feet. Rufus hummers often build this year’s nest on top of last year’s nest.

Yes, hummingbirds are definitely attracted to red. They have keen eyesight and no sense of smell. Flowers that attract them tend to have no fragrance at all. So, red attracts hummingbirds but after that, they just want a nectar buffet. If there aren’t a lot of red flowers in your garden, but you do have plenty of the nectar producing plants try hanging some red surveyors plastic tape near the nectar producing plants. The hummingbirds will be attracted to the red tape and then find the nectar. After you see a few hummingbirds, get rid of the garish red streamers. Hummingbirds will keep coming back to the same spot for food. They have fantastic memories. (Oh, to be a hummingbird). The right nectar producing plants keep Rufus hummingbirds coming back and encourage Anna’s to stick around.
There are plenty of species and hybrid plants that attract hummingbirds. Native and species plants should be first choices. They produce more nectar. The more a plant is tweaked and hybridized the less nectar it is likely to produce.
Since hummers eat both nectar and insects, care needs to be taken to protect their food sources. Pesticides are rarely a good idea under any circumstances but pesticide spray in a hummingbird garden eliminates a major food source since it annihilates a majority of insects. Hummingbird gardens help support a key relationship with the gardener. Bugs in your garden attract hummingbirds that eat the bugs that you don’t want anyway.  You get all of this help with a minimum of gardening effort.
Nectar producing Washington native trees that attract hummingbirds include Madrone,(Arbutus menziesii), Pacific Dogwood (Cornus Nutallii and Pacific Crabapple (Malus fusca Pacifica). The most visited shrubs are Red Gooseberry (Ribes speciosum), Red –flowering Currant (Ribes sanguineum and Red huckleberry (Vaccinium parvifolium) and Salmonberry (Rubus, spectabilis). Favorite perennials and vines include Western columbine (Aquilegia formosa), Indian paintbrush (Castilleja species) Pacific bleeding heart (Dicentra Formosa) and Orange honeysuckle (Lonicera ciliosa). Any penstemon or fuchsia species will undoubtedly be hummingbird magnets. Water is a necessity. Hummingbirds prefer fine mists (they’ll even play in mist from sprinklers) but any shallow basin filled with water will be used.

And what about feeders? Feeders are necessary if you want a few Anna’s to stay around through winter. A combination of plants and feeders will assure year round visitors. It doesn’t really matter what kind of hummingbird feeder you use as long as precautions are taken. Here is where I get lost. Relying on Mother Nature to take care of plants as food sources is one thing but the regimen for a clean, safe hummingbird feeder requires discipline. First of all, the recipe…boil together, 1 cup of sugar and 4 cups of water until sugar is dissolved. Cool and store in the refrigerator. This is homo-sapien hummingbird food. When you and the hummingbirds are ready, half fill a feeder with the sugar solution. Once a week, empty the feeder, and replace with fresh sugar solution. Even in cooler weather this is necessary. Using the fresh solution avoids spoilage and protects the birds from bacterial diseases. If the temperature climbs into the 80’s it’s absolutely necessary to clean the hummingbird feeder even more often, every few days. Once a month the feeder should be soaked in a 1/4 cup bleach to 1gallon water solution. With all of this effort, no wonder we’re all so excited when we see a hummingbird perched on a feeder!

Growing a hummingbird garden also increases the likelihood of attracting butterflies. Many flowers attract both. Theme gardens are always a lot of fun and serve many purposes. Theme gardens give you parameters for plant choices. Sometimes this is necessary, especially if you’re a “nursery hopper” with no plant buying willpower. Theme gardens set limits and can be a real education, otherwise known as an obsession.
So, start with a pesticide free garden, loaded with plenty of bugs, nectar-producing flowers and an occasional feeder; add some shallow or moving water and you have all of the components necessary for a hummingbird sanctuary.